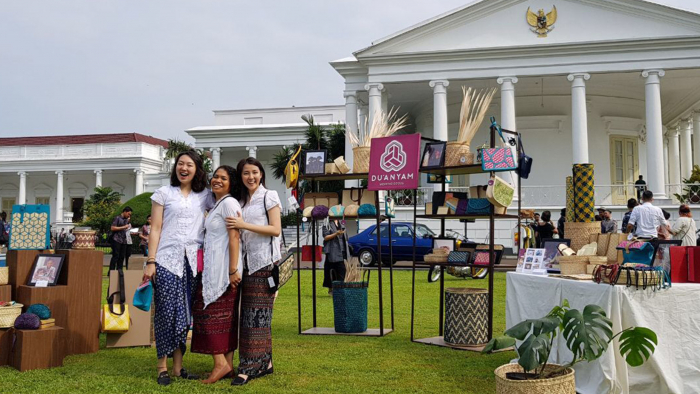 Through their observation a year prior, the three co-founders were able to highlight several critical issues, such as malnourished mothers, lack of income/cash access, low education level, lack of infrastructures, and more. Realizing that donation programs may only work temporarily in resolving the issues, Du Anyam then turned to the two most powerful resources available: the fact that the majority of the women can weave and the abundance of local natural resources.

Under the Du Anyam flag, a fusion of “Du’a” and “Menganyam” which translates to “The Weaving Mothers” in Sikka, Maumere local tongue, production soon began after a series of orientation, introduction and training was implemented. The initiative prioritized empowering young and pregnant mothers to be self-sufficient, but also gained support from all-age local women, including female farmers and senior local citizens. 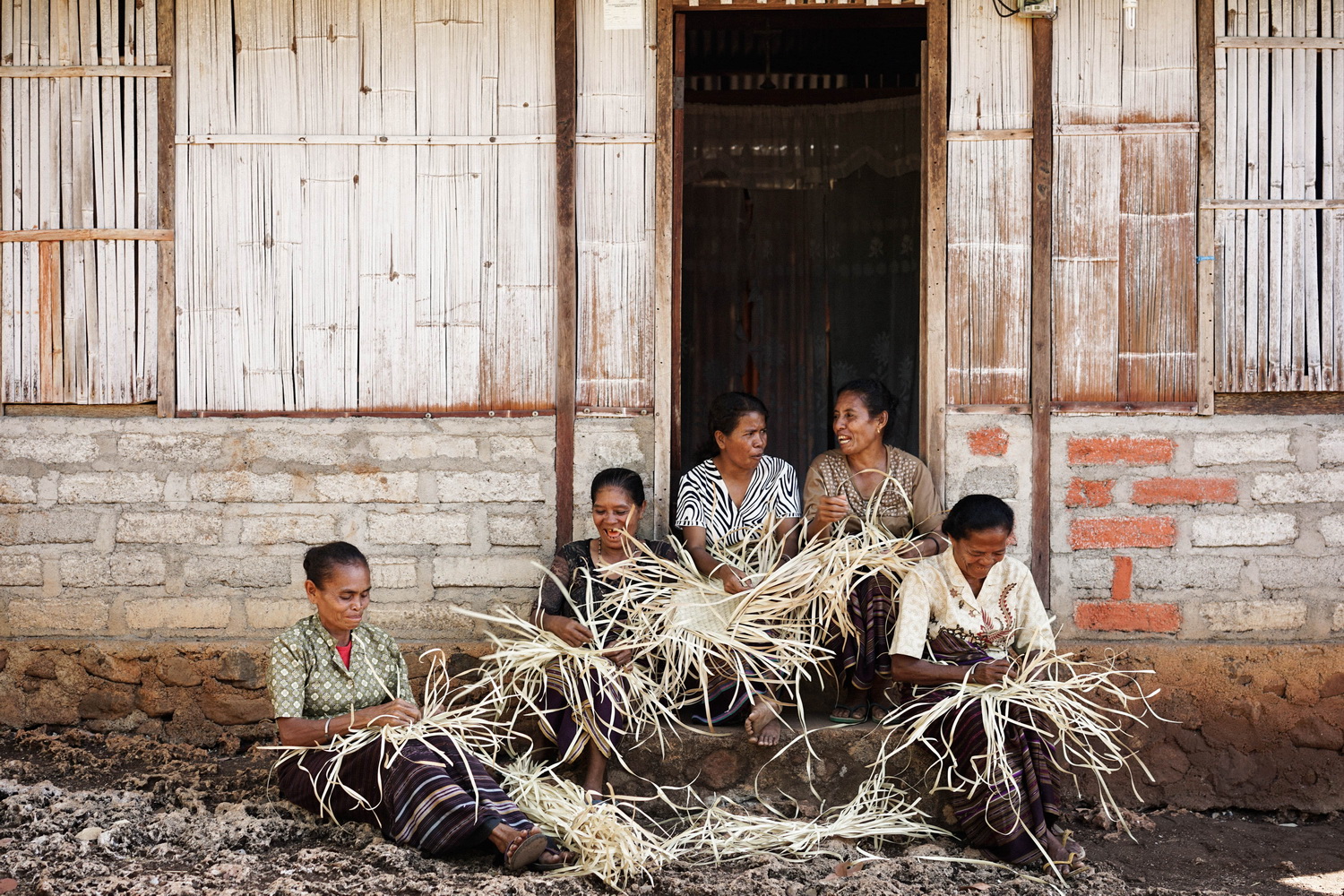 Merging modern urban design in the form of unique traditional weaving is proven to be a successful strategy in answering the demand for unique corporate souvenirs, useful gift products and creative handmade items. By 2015, Du Anyam had steadily expanded to other districts in East Flores, broadened the reach to Papua in 2017 and recently to South Kalimantan in 2020. Along the way, Du Anyam has been able to recruit more women weavers while establishing various social programs from financial literacy, nutrition supplement program, scholarships, provisions of infrastructures and public facilities, to production and managerial skills training. 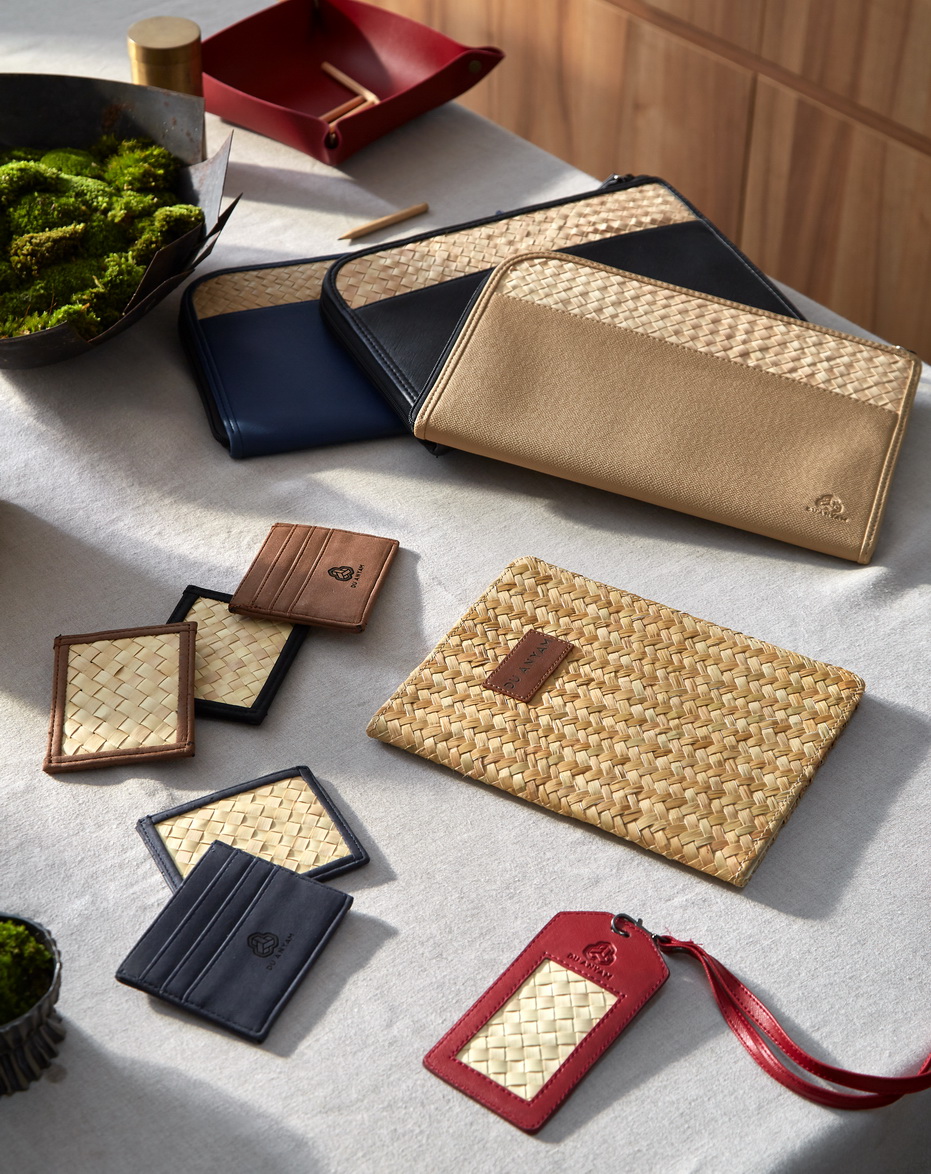 Today, Du Anyam has recorded a total of over 1400 women weavers across 54 villages in 3 provinces in Indonesia. It’s been able to offer exclusive Indonesian made corporate gifts with personalized logos for local businesses, while also exporting traditional handwoven products to the USA, Europe, Australia and Japan. Having gained multiple insights & experiences by active participation in international crafts events, it’s no wonder that Du Anyam was given the honor as the official merchandiser of Asian Games 2018. Dubbed as the social entrepreneur business brand with winning stories, Du Anyam constantly returns to its three core pillars, i.e. to empower women, promote culture and improve livelihood. By focusing on the social impact which is generating income, educating the local community and the market, as well as long-term social programs, Du Anyam has been able to redefine social entrepreneurship with a sustainable model. 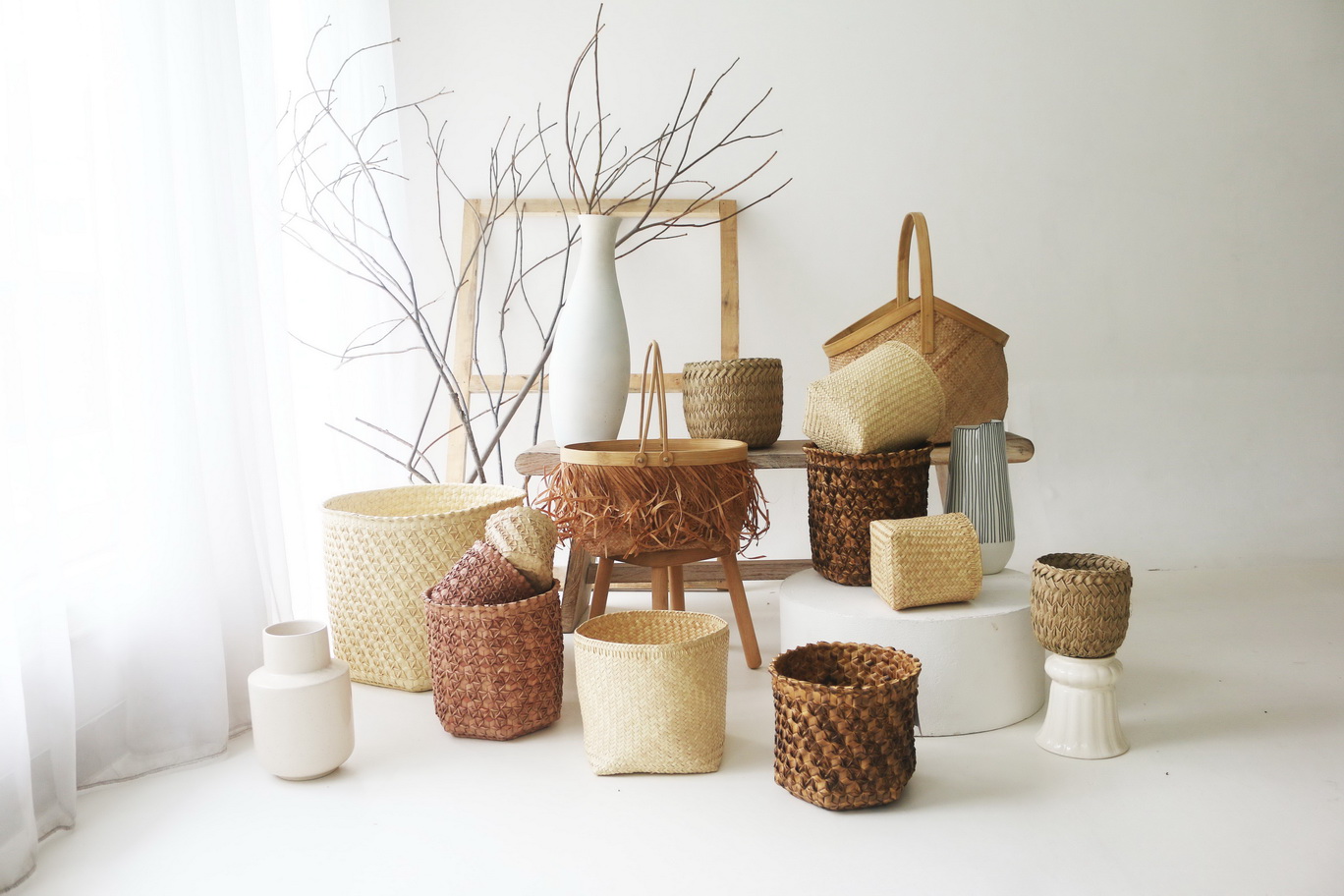 By building their business foundation on creating long lasting social impacts, Du Anyam has been able to find a way to promote and reward work of marginalized women through fair trade,

In its stride, Du Anyam maintains to uphold their business pillars and use social impacts as the benchmarks of business success. The three female founders believe that the work is far from done as more initiatives for female empowerment are currently being geared up. The goal remains from day one: to deliver benefits that empower the lives of women in rural and hidden villages all across Indonesia.

The GRASP 2030, which generously funded by P4G (Partnering for Green Growth and the Global Goals 2030), is built based on evident success of what has been done by WRAP (Waste & Resources Action Programme), IBCSD’s partner in developing GRASP 2030

The launch event was inaugurated by Dr. Arifin Rudiyanto as Deputy for Maritime Affairs and Natural Resources of the Ministry of National Development Planning/BAPPENAS and also attended by Ian De Cruz, Director of P4G Global and Lars Bo Larsen, Ambassador of Denmark to Indonesia.

From Ian de Cruz’s explanation, it was found that there is a US$2.5 trillion financing gap needed by developing countries to implement the SDGs. The gap will be filled if the private sector and investors can work together to find a solution. “What we are doing with GRASP 2030 is a Target, Measure, Act, Invest approach. This is in line with Indonesia’s commitment and national strategy to achieve the goals of the Low Carbon Development Initiative.” he added.

Danish Ambassador, Lars Bo Larsen in his speech explained, “When we talk about the food value chain, from production to consumption, I think it is important for Indonesia to identify different strategies at all levels. The challenge for every country is that we have different targets and actors at different levels.”

Putu Juli Ardika, from Ministry of Industry, said that in terms of the processing and packaging industry, since 2000, food loss was recorded at around 4.17%, in 2011 it fell to 3.75%, and in 2019 it fell again to 3.26%. “We appreciate industry players participating together on how to reduce food loss and food waste. We think this effort will be quite successful,” he concluded.

In closing the event, Anang Noegroho emphasized that his party appreciated two things. The first is the tagline ‘Gotong Royong’ which is a form of social capital to build this nation in a better direction, building initiatives that are the original face of our nation. Second, the government really appreciates multi-stakeholder cooperation and does not forget about the inclusiveness and synergy of all parties. 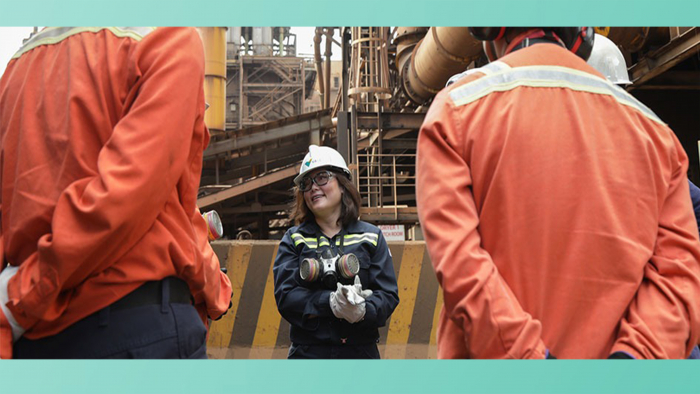 Febriany has been with Vale for almost 14 years. She has nearly 22 years of international work experience in the financial and mining industry. She worked for PricewaterhouseCoopers in Jakarta and in Amsterdam, The Netherlands, for total of seven years. During that time, she was involved in various types of financial due diligence works and international projects.

She started her career with PT Vale as Manager of Capital Project Controls and Financial Evaluation. After three years in the role, she was assigned to the regional office of Vale Base Metals Asia Pacific and Africa based in Brisbane, Australia for 2.5 years. There, holder of Bachelor of Economics from the University of Indonesia and MBA from UCLA Anderson School of Management and National University of Singapore, was responsible for overseeing performance of Vale Base Metals units in Indonesia, Japan, China, Taiwan and Africa. Upon her return to Indonesia, she assumed responsibility as CFO of PT Vale from 2013 to 2018 and was Deputy CEO for two years, before the Top 25 Most Influential Women in Treasury in Asia Pacific (2015) finally being appointed as CEO.

Being a CEO in a company engaged in an industry with such a masculine image did not dampen Febriany’s spirit. She believes that diversity will bring change in a positive direction. Difference makes all the difference. This is in line with Vale’s target to be a “home” for all talents by embracing diversity, creating equality and building inclusiveness. Febriany, who was chosen as Asia’s Top Sustainability Superwomen 2019, is also active in voicing issues of diversity, inclusion, and sustainability, through various forums, such as Women in Mining & Energy (WIME), Indonesia Business Coalition for Women Empowerment (IBCWE), and currently serves as Vice Chairman of the Indonesia Business Council for Sustainable Development (IBCSD). Other data from the UNEP Food Waste Index in 2021 shows that the amount of food waste globally reaches 931 million tons in 2019. Ironically, the Covid-19 pandemic has increased the number of malnutrition between 83-123 million people. And 6.7 million of them are children suffering from acute malnutrition.

On the other hand, the Indonesian government remains optimistic about reducing waste with a target of 30% and 70% by 2025, including food waste. In fact, reducing food waste is one of the priorities in the 2020-2024 RPJMN, as conveyed by representatives of Medrilzam, Director of the Environment, BAPPENAS. According to representatives of Anang Nugroho, Director of Food and Agriculture of BAPPENAS, in more detail, horticultural products, especially vegetables, are the largest contributor to food waste products in Indonesia, which must receive attention.

Seeing this, IBCSD together with WRAP introduced an initiative based on voluntary agreement, where businesses can participate in the commitment and start calculating and analyzing their respective food losses and losses. Indeed, one of the right solutions in dealing with the problem of food waste is to involve the business sector. Based on the presentation in the discussion entitled “Business Actions to Overcome Food Shrinkage and Food Waste in Indonesia” held by the Indonesia Business Council for Sustainable Development (IBCSD) on April 29, 2021, only 11.5% of food waste is produced in the consumption process in most developing countries. . Meanwhile, the production process contributed 23.5% of food loss and waste, then post-harvest storage contributed 24.4%, the manufacturing process 20.3%, and distribution 20.3%. This means that business has a very big role in dealing with this problem.

“IBCSD intends to introduce voluntary agreement-based initiatives to overcome the problem of food loss and waste in Indonesia. We believe that this issue has become the concern of many parties. So that this is not a reinventing the wheel program, but a support and enhancement of existing initiatives globally and nationally,” said Yono Reksoprodjo, Executive Committee of IBCSD.

Interestingly, mapping and reducing waste loss and waste in a business chain will not only benefit the environment and help achieve government targets. WRAP’s International Partnership Manager, Michael Jones, provides a clear example of how UK businesses implementing reduced food losses and waste at their company have succeeded in reducing previously invisible costs and providing significant benefits to the business. Another good news is that business people who are interested in this initiative can join the voluntary agreement initiated by IBCSD. 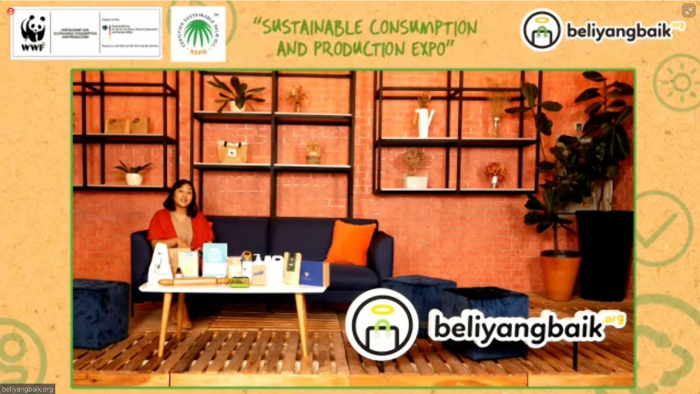 As part of the collaboration of the 2021 ‘BELI YANG BAIK’ HYBRID EXPO event with WWF Indonesia, IBCSD held a talkshow, sharing about green products and green production processes that have been carried out by companies from different industrial sectors. The talkshow was held on Wednesday, April 21, 2021, 14.00 – 15.30. 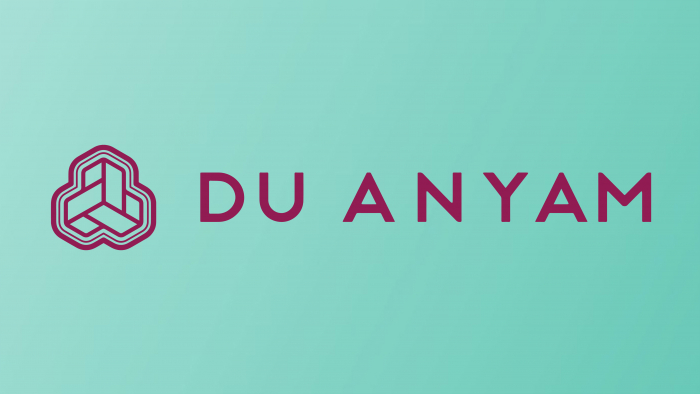 Du Anyam has shown a very good commitment through their business practice through promoting the unique wicker-crafting culture of artistically gifted women in Flores (East Nusa Tenggara) to people around Indonesia and other parts of the world. Du Anyam aims to empower these women by helping them gain control over their family’s income, and resulting in a positive change to escape poverty. 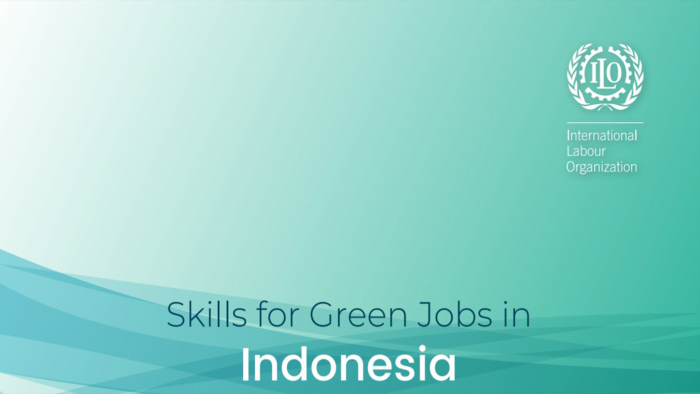 The report hopefully can contribute and offer a sound baseline to the continuing dialogue and engagement efforts among the tripartite partners. As Michiko Miyamoto, Country Director ILO Country Office for Indonesia and Timor-Leste stated, human capital & skills development is key priority of the government, and linking this to the country’s sustainability goals is a timely contribution to ongoing implementation of Indonesia’s long-term development plans. The information herein can be used as a starting point for current discussions, to reinvigorate the interest among key stakeholders, who are actively charting the country’s transition to a greener economy. To learn more about the report, please refer to this link: Skill for Green Jobs in Indonesia – The Indonesia Business Council for Sustainable Development : The Indonesia Business Council for Sustainable Development (ibcsd.or.id)